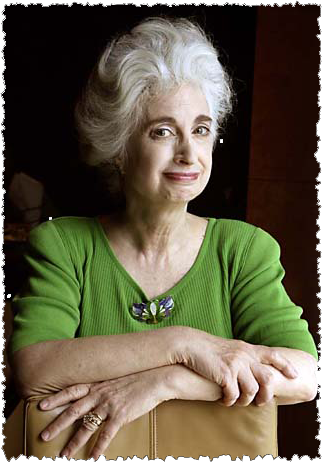 Born a perfect lady in an imperfect society, Miss Manners is the pioneer mother of today’s civility movement.  Now if she could only persuade people to practice civility as much as they talk about it…

Her tireless efforts to expand the understanding and exercise of etiquette beyond the stereotypical terror of too many pieces of silverware on the dinner table have not, however, escaped official notice. During a White House ceremony In November, 2005, Judith Martin was awarded the nation’s highest honor in the humanities, the National Humanities Medal, in recognition of her contributions to society as America’s foremost etiquette columnist and author. Given by the President of the United States under the auspices of the National Endowment for the Humanities, the Medal honors individuals or groups whose work has deepened the nation’s appreciation of the humanities, broadened our citizens’ engagement with the humanities, or helped preserve and expand Americans’ access to important resources in the humanities. Judith Martin’s “Miss Manners” newspaper column — distributed thrice-weekly by the Universal UClick and carried in more than 200 newspapers in the United States and abroad — has chronicled the continuous rise and fall of American manners since 1978.  Since 1996, she has been writing an additional “Miss Manners” column for the Microsoft Network, and she is a contributor to the Financial Times.

Her subject — etiquette — was for decades dismissed as an archaic frill to be dispensed with by a world on the go that was much too busy to trifle with such niceties. Yet serving as the language and currency of civility, etiquette reduces those inevitable frictions of everyday life that, unchecked, are increasingly erupting into the outbursts of private and public violence so readily evident in fractured families, stymied legislatures, drop-of-the-hat lawsuits, road rage, and other unwelcome by-products of a manners-free existence. These unpleasant developments have bred a nationwide call — from academics, politicians, writers of all stripes, and the public at large — for a return to common courtesy.

As readers accept her view of life as a comedy of manners, they have increasingly sent Miss Manners not only their table and party questions, but those involving the more complicated aspects of life — romance, work, family relationships, child-rearing, death —as well as philosophical and moral dilemmas. In her columns and her books, Mrs. Martin explains the etiquette element present in nearly every aspect of life and explores etiquette’s philosophical underpinnings.  From free speech to political correctness, from office politics to national politics, she gamely wrestles with the gamut of social discourse and recourse. Mrs. Martin’s writing aims to both instruct and provoke her audience, as numerous commentators have observed. “Judith Martin is The National Bureau of Standards,” states columnist George Will. She’s written “some of the toughest social criticism you are likely to read,” according to critic Charlie Toft. The New York Times declares her work “an impassioned plea for a return to civilized behavior” while Newsday says she is “a philosopher cleverly and charmingly disguised as an etiquette columnist.” The Los Angeles Times deems her “an authentic visionary” and her writing “a kind of study in cultural anthropology, even if she dresses up her field notes with artful parody and self-deprecating humor.” Writer Christopher Buckley calls her “an authentic comic genius”, and TIME Magazine declared, “…[Judith] Martin has helped transform etiquette from the realm of society matrons to a tool for everyday life.”

Mrs. Martin is also a novelist, travel writer (on Venice), and journalist and, as the nation’s leading civility expert, a frequent lecturer and guest on national television and radio shows. As a reporter, feature writer, and drama and film critic, she spent 25 years at The Washington Post, where she was one of the original members of the Style and Weekend sections.

Her most recent book, Miss Manners’ Guide to a Surprisingly Dignified Wedding — co-authored with Mrs. Martin’s daughter, Jacobina Martin, and published by W.W. Norton & Company — is a manifesto against today’s monster weddings that explains how to plan nuptials that are charming, contemporary, affordable, and yet excruciatingly correct.